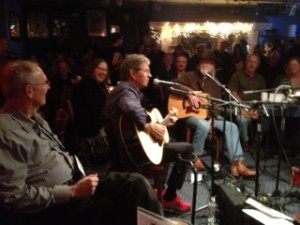 As promised, I wanted to give you my highlights of Tin Pan South, in Nashville. http://www.tinpansouth.com/

NSAI (Nashville Songwriters Association International) puts it on and calls it the biggest festival of songwriters in the world. There were 10 venues with two “rounds” a night, with 4 performers per “round.” In the interest of fairness, with 10 competing venues, it was often hard to decide whom to go see- so these are the highlights of what I actually got to see.

Hugh Prestwood (The Song Remembers When, Ghost In This House) introduced The Song Remembers When by saying when he was first played Trisha Yearwood’s version by her producer, he jumped up and said, “I’m going to be in the Songwriter’s Hall of Fame!” He was my wife’s favorite of the entire Tin Pan South festival. I think part of that was his distinctive voice, which can send chills down your back (I mean that in a good way!).

Sonny Curtis (I Fought The Law, theme from the Mary Tyler Moore show- Love Is All Around, More Than I Can Say) replaced Buddy Holly in The Crickets on voice and lead guitar, after Holly’s death. Though he complained of wrist surgery, he played impeccable rock ‘n’ roll guitar and had the crowd at The Bluebird singing along on virtually every song.

Mac Davis (In The Ghetto, Baby Don’t Get Hooked On Me, One Hell Of A Woman, Stop And Smell The Roses) not only wrote the Elvis hit, In The Ghetto, but also wrote hits for himself as an artist, AND was a star of TV and film. He, like Sonny Curtis, with many decades of performing under his belt, proved to be an incredible writer, who’s still relevant. Both of them are an inspiration to me. I hope I am still writing and performing when I’m their age!

I’ve taken several classes with Jerry Vandiver (For A Little While, Athens Grease) based on his book, “Your First Cut”. He’s just a great guy, which reflects in his songs and his humor onstage. I also highly recommend his book which gives you a step by step checklist on how to get your songs cut.

Jack Sundrud of Poco fame, had that incredible “Poco voice”.

Karen Staley (Take Me As I Am, On A Night Like This, Let’s Go To Vegas, Keeper Of The Stars) was one of the funniest artists in the entire festival.

Wil Nance (She’s Everything, Round About Way, Cool To Be A Fool, Hard To Say Hello) had songs that just killed me. One of his “uncut” songs, “Clean-up In Aisle Five” absolutely must get cut!

Dave Gibson (Jukebox In My Mind, Ships That Don’t Come In, Daddy Never Was The Cadillac Kind, Queen Of Memphis, Lonely And Gone) is just a killer writer, with a voice to go with it! Full disclosure: I co-wrote Daddy’s Shoulders with Dave and Eddie Heinzelman, (which he didn’t play… go figure!) so maybe I have a personal bias towards him, though he’s still great!

AJ Engstrom looks like he’s a teenager, but he’s probably in his 20’s, has a dynamite voice, and rowdy fun songs, like Beer Truck. He’s working on his first album- watch for him.

Pat Alger (The Thunder Rolls, That Summer, Unanswered Prayers, What She’s Doing Now, Small Town Saturday Night, Going Gone) is a writer that I worship at the alter of, with songs like Unanswered Prayers (recorded by Garth). If you haven’t heard it, check it out on YouTube or something…

Subscribe Now
For Email Marketing you can trust.
« The 13th Step To Flying With Guitars
Tin Pan South Part 2 »