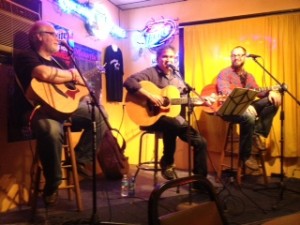 Here is part two of my highlights of Tin Pan South, in Nashville. http://www.tinpansouth.com/

NSAI (Nashville Songwriters Association International) puts it on and calls it the biggest festival of songwriters in the world. There were 10 venues with two “rounds” a night, with 4 performers per “round.” In the interest of fairness, with 10 competing venues, it was often hard to decide whom to go see- so these are the highlights of what I actually got to see.

Hall of Fame songwriter Roger Cook (Long Cool Woman In A Black Dress, I’d Like To Teach The World To Sing, Here Comes That Rainy Day Feeling Again, I Just Want To Dance With You) is just a gas. This guy has written classics that are in our DNA- if we’re over a certain age.

Tom Douglas (I Run To You, The House That Built Me, Coming Home, Little Rock, Grown Men Don’t Cry, Southern Voice, My Little Girl, Let It Go, Love’s The Only House…) had more recent hits than anyone else we saw. One of the cool things about Tin Pan South is that on the one hand, many of the songwriters are artists in their own right and sound as good, or better, than the artist that cut their song. On the other hand, you have writers like Douglas, who can play excellent piano, but can’t really sing- who still gets a chance to show off his impressive catalogue of hits.

He has been working with Mockingbird Sun (Brett Taylor, Truck Roley, Charlie Berry), three young guys with terrific harmonies, ala The Eagles.

Several years ago, I had the pleasure of having a mentor session with Michael Peterson (Drink Swear Steal And Lie, From Here To Eternity, Too Good To Be True, By The Book). The guy has it all. Tall, good looking, one of the best guitarists in the festival, and songs that’ll move you to tears or laughter. He’s also an artist and wants to do an album of new crooner songs. I want that record in my collection when it comes out!

Allen Shamblin (I Can’t Make You Love Me, The House That Built Me, Life’s A Dance, Don’t Laugh At Me) co-wrote one of my favorite songs of all time- I Can’t Make You Love Me. He ended up inviting a seventeen-year-old woman, who he met before the show for the first time, to come up and play it on piano. And he cracked the audience up, parodying his song, The House That Built Me, by singing a version that included,“I won’t take nothin’ but your Lexus keys” at the end of the chorus.

Rob Crosby (Concrete Angel) is a heavy hitter, who kept blowing me away with his lyrics.

And last, but not least- a show called NSAI presents the Best of Spring Training 2014. At Spring Training, the songwriting conference, participants got to pitch a demo to a publisher. Songs that got “picked up” by publishers were voted on to select the “best” twelve. Those writers then got to play their songs at this final showcase of Tin Pan South. I was proud that two of my friends from Oregon got to perform: Dan Lowe (co-writer Peggy Lowe) played the smoldering Hooked On Crazy. While Matt Price played the clever Love or Bust.