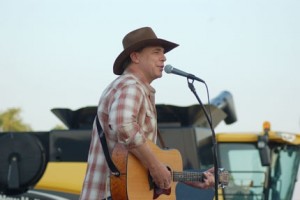 This week I had the pleasure of interviewing Michael Peterson. I was curious how he went from going to high school in Eastern Washington state to becoming a country star, with the number one country hit, From Here to Eternity, on his 1997 self-titled debut album. That album also produced four other Top 40 hits, Drink, Swear, Steal & Lie, Too Good to Be True, When the Bartender Cries, and By the Book.

I originally saw him perform and speak at the kick off to my first NSAI (Nashville Songwriters Association International) Symposium (now called Spring Training). I later went to a songwriting camp, where I got to have a mentor session with him. And, recently I caught his show at NSAI’s Tin Pan South.

Questions and answers have been edited for length and clarity.

HitSongTips.com: I was going to save this question for later, but I think I’ll jump right in: Why do you write songs?

Peterson: I think the answer to that question is probably different depending on which season of a writer’s journey you’re in.

When I was in my late teens, early 20’s, the real motivation for writing songs was almost unexplainable. It was a feeling that I had to say something, and I had been inspired by a couple of different artists. When I listened to their music, I felt such emotion that I wanted to move other people like that music moved me.

When I was 15, my father was shot to death. When I was 17, my stepfather committed suicide. So, I had a lot of emotional stuff that I felt. Songwriting helped me process that on some level. I think that is pretty much why I wrote songs in those years. Then the more that I wrote from 16 to 23, the more I began to understand that it was a craft. There were things that you could learn that could help you. There was a community of people that were doing it. You can really make a record. You could go out and sing and people would like your music, not just you singing other people’s songs. I started getting “bit” (by the desire to do music). All the energy I had put in from the previous seven or eight years really got a hold of me.

On some level, I moved into my next phase of my writing with that inertia behind me, that momentum. If I’m going to take this to the next level, what do I have to do? I’ve got to teach myself more about this instead of just creating off-the-cuff.

The second season of writing for me was a lot of reading every book I could get my hands on, reading every article I could find that talked about songwriting. Also, istening to more music with the ear of a songwriter, a fledgling songwriter at that point, but none-the-less, a songwriter. When I listened to records, I listened a little differently than when I did in my teens. I just really got into it. I guess that’s probably the best way to say it.

I made my first record in my late 20’s. A Michael Peterson record that was funded, songs chosen, an album cover designed, and here comes a press photo. And wow, you know, I think I’m in the music business! All of that starts to become a certain energy that drives you… you’re reward, if you will. That whole thing about how habits develop, every time a habit kicks into gear with somebody, the catalyst is some kind of a cue. For me the cues were my emotions, what I felt; as well as how much fun I had being with audiences. My habits were my songwriting habits I had developed. The reward was having people like what you do and having the chance to say what you deeply felt. And having the chance to sit in that chair where you saw people you looked up to sit and imagine that maybe someday you could take the next step and be at a higher level. Making a record in the studio, finding out what that’s all about. These are all rewards that became part of the craving. The craving maybe responds more aggressively the next time. Then you got more rewards. That strengthens the cravings. It just becomes a cycle that’s not unlike any set of habits that you might develop.